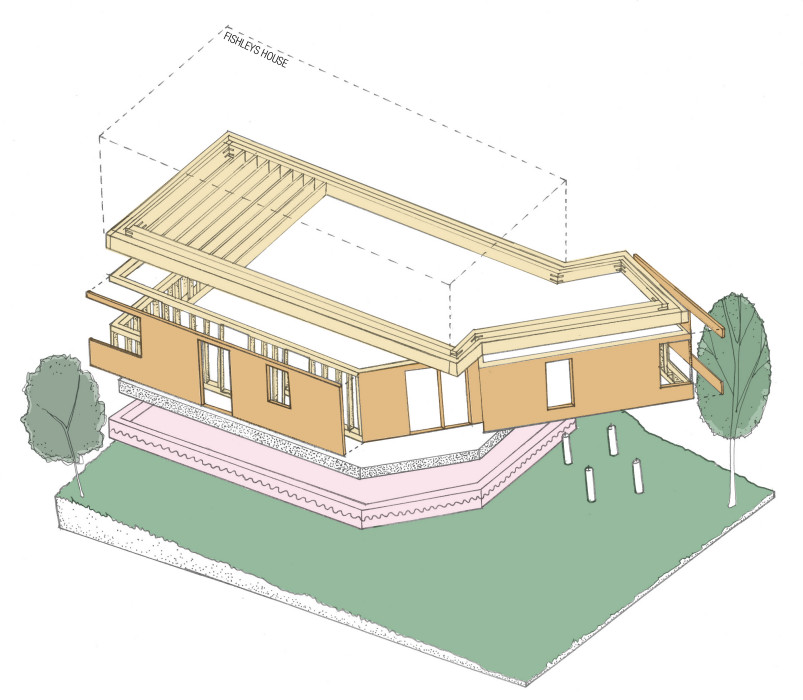 Situated in rural Herefordshire, The Fishley House is one of Architype’s first private Passivhaus residential commissions to be realised on site.

The new house, nestled at the bottom of a well-loved garden in picturesque Colwall, is situated in an Area of Outstanding Natural Beauty (AONB), with stunning views to the Malvern Hills. The design for the three-bedroom home is currently under construction, and I am lucky enough to be spending one day per week on site helping local developer, Mike Whitfield and his experienced team with the build.

The home was designed in close consultation with the clients, Mike and Liz, who have been living on the site for nearly 30 years. The flexible plan, designed to support the couple for the rest of their working lives and into retirement, has taken a sensitive approach; by making the most of the views to the Malvern Hills and the clients established garden, and through specifying a range of natural materials.

The opportunity to spend time on site with the small but expert team has been a fantastic insight into how-to-build a Passivhaus. A chance to follow the process right from the beginning, and understand each necessary step of the journey.

Initially I participated in the entire first week of construction, which involved preparing the floor slab. The fun part was raking and smoothing the grey concrete mix which took just one day, the previous four days however were spent laying the formwork for the house. We used a pre-made Isoquick plinth, which forms the first part of the continuous thermal layer, insulating the concrete slab, which we covered with a waterproof membrane. Once the wet concrete arrived on site it was all hands on deck with rakes, shovels and gumboots. Just shy of 30m2 was delivered to site, poured and once level, was finished with a float. The client, Liz, cleverly set up a time-lapse camera for the day so you can watch our hard work in just 16 seconds flat here.

Jump forward just a few weeks and the timber frame was being erected. For this house, the structure for the ground floor was entirely completed first, finished with ceiling panels and clad in fibre board, before beginning the I-beam structures to form the first floor.

Despite hurricanes and downpours at the beginning of February, progress continued to be good on site, and the house was finally made weather proof, with the exterior entirely wrapped in blue Siga membrane by the end of the month. The interior meanwhile took a rather more green appearance, with all ceilings and walls covered in SmartPly VarPairTight; an OSB board that comes with an airtight layer already attached. The next stage – Warmcell insulation!

The weeks spent on-site so far have gifted me a great hands-on experience and really accelerated my knowledge of construction beyond what I can learn from a desk or a lecture theatre. Getting my hands dirty with the team every week has also enhanced my appreciation for the incredibly challenging conditions construction teams endure, (particularly in mid-winter!); and left me in awe at the ease of skill a lifetime of practice makes. On the flip side, my time on site has opened up another can of worms, and I now have even more questions then when I started!

I look forward to sharing the progress with you later in the spring when the finishing touches are being applied!