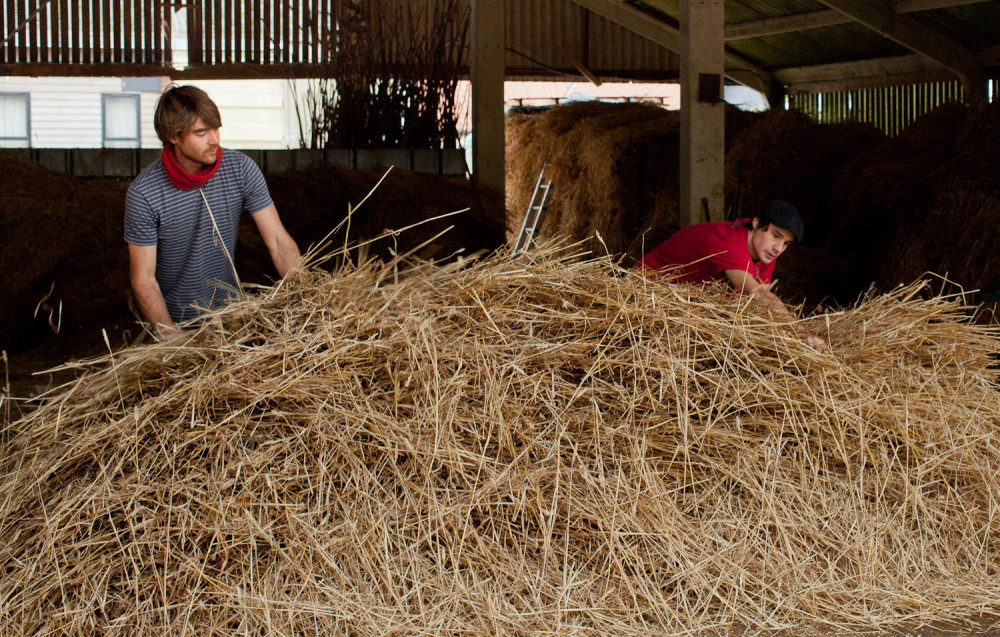 We know that we are facing a depressing array of climate issues.

The UN has warned that our failure to act early on climate change means we now must deliver even deeper cuts to carbon emissions just to stand a chance of slowing down the rise in temperatures.

We need to stop talking and, in the words of Greta Thunberg, act now as if  ‘our house is on fire.’

For those of us who have been trying for years to highlight the importance of reducing impact, it is welcome to see the new interest in solutions like Passivhaus and zero carbon design, even if aspirations are yet to be backed up by legislation. We, and the Stirling prize winners Mikhail Riches, have shown too that ecological design can be beautiful and good for your health.

How buildings can come full circle

Looking at building impact in the round through a circular economy approach is one way that will help towards tougher emissions targets.

The circular economy is an approach aimed at eliminating waste and use of resources. Switching to a circular economy will mean designers will have to think about their impact and design in a way that allows for reuse of structures and materials. This regenerative approach is in contrast to the traditional linear economy model which has a ‘take, make, dispose’ model of production. The built environment is responsible for a huge amount of carbon being released into the atmosphere in production and operation and is the main waste creator globally.

But change is coming.

Progressive authorities like Edinburgh have already committed to Passivhaus, and in October it was great to see the Mayor of London’s office publish ‘Design for a Circular Economy.

This  primer will help designers prepare for London’s transition to a circular economy and encourage design with consequence, advocating refurbishment rather than demolition as a first choice in all projects. This will help those involved in large projects report on circular economy ambitions as set out, but not clearly detailed, by the Mayor in the draft London Plan and Environment Strategy, and could trickle down to smaller projects. It will also minimise the 140 million tonnes of waste that London construction generates annually. 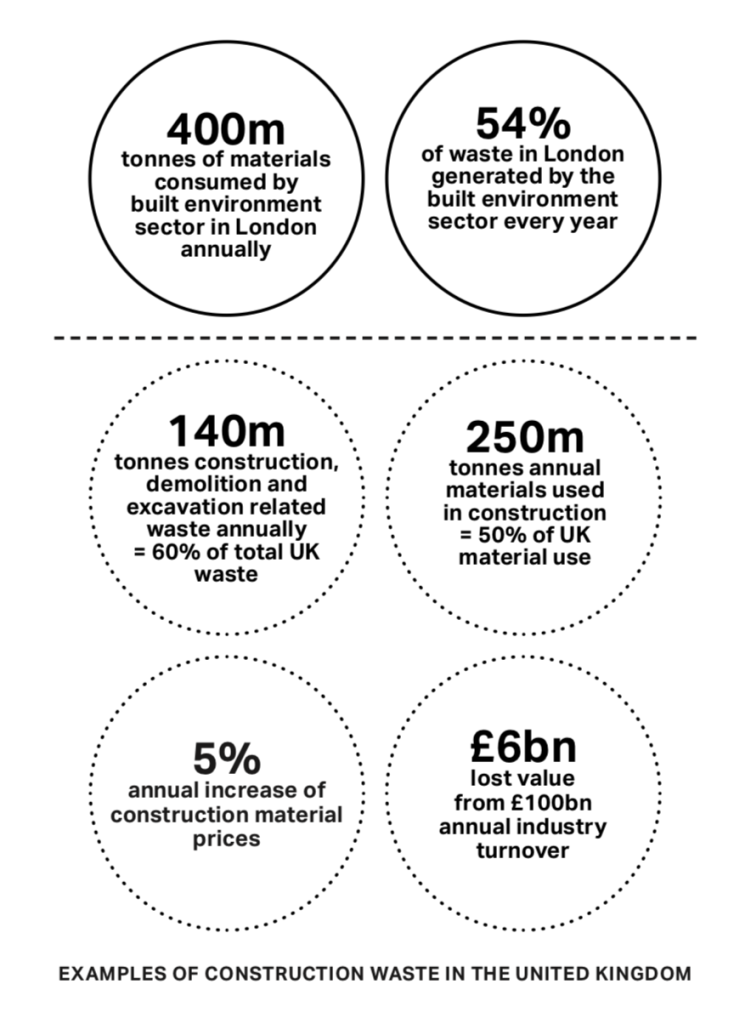 The approach is clearly in accord with Architect Journal’s great RetroFirst campaign, the thinking of Bill Gates and is demonstrated through projects such as The Sustainability Centre.

We have long supported the UK Green Building Council’s and #retrofirst aims to change the VAT system as it is absurd that demolition and new build is cheaper than a retrofit.

A great example of renewal of buildings that I’ve been involved with is The Gower School, where we worked with the school for over ten years to transform existing buildings and spaces on two sites into fantastic educational facilities. As well as minimising the environmental impact of materials waste the embodied (or upfront) carbon emissions are vastly reduced compared with a new build. With thoughtful design, retrofitting also harnesses the benefits of speed, community integration and flexibility, and maintains historical craft and styles.

There’s no doubt that interest is growing in what can practically be done to tackle this emergency.

I welcomed the opportunity to demonstrate how we worked with forward-thinking clients to apply a circular economy approach on projects such as the newly opened Harris Academy Sutton for Sutton Council and The Enterprise Centre for The University of East Anglia at recent talks for The Passivhaus Trust, Construction Week 2019, and London Build.

The graphics below show the two projects viewed through the circular economy lens of the ReSOLVE framework developed by The Ellen MacCarthur Foundation, which is a useful checklist for designers, covering radical approaches such as design for deconstruction. 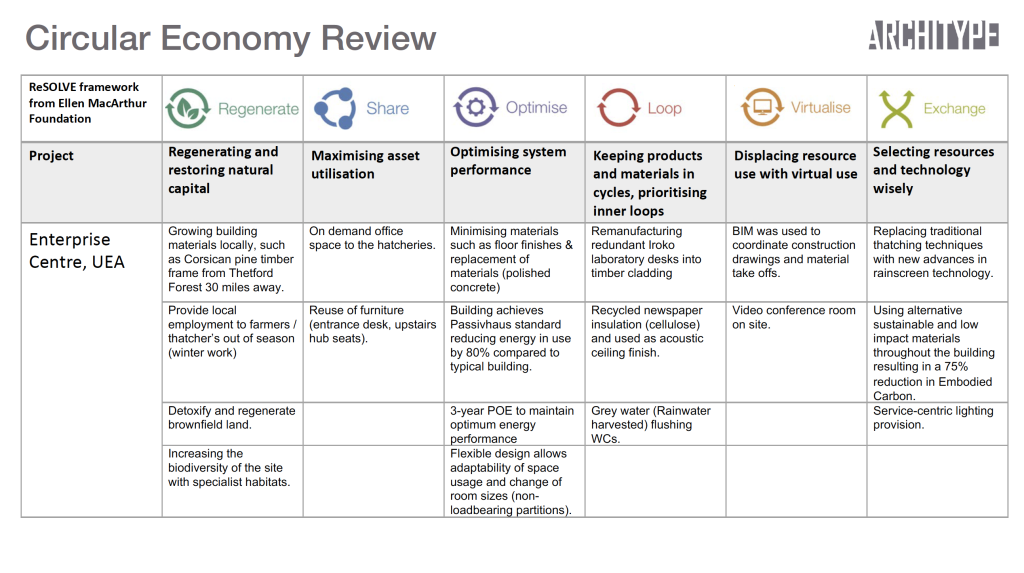 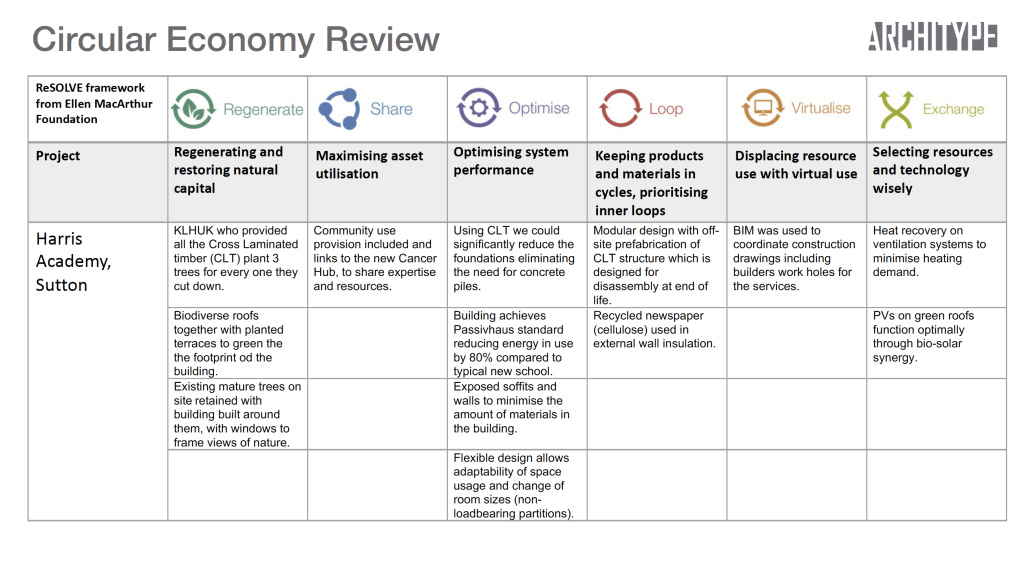 The projects demonstrate the holistic approach we took to protect the planet as much as we can. If buildings like The Enterprise Centre can reduce embodied carbon by 66% compared to a standard build, why can’t they all?

The actions taken include:

As the UN has warned, the world continues to heat up at an alarming rate. Let’s not waste the next ten years talking about what we might do, when we already have so many of the solutions. Before the planet does spin out of control, why don’t we stop thinking along destructive lines, and start embracing the circles. 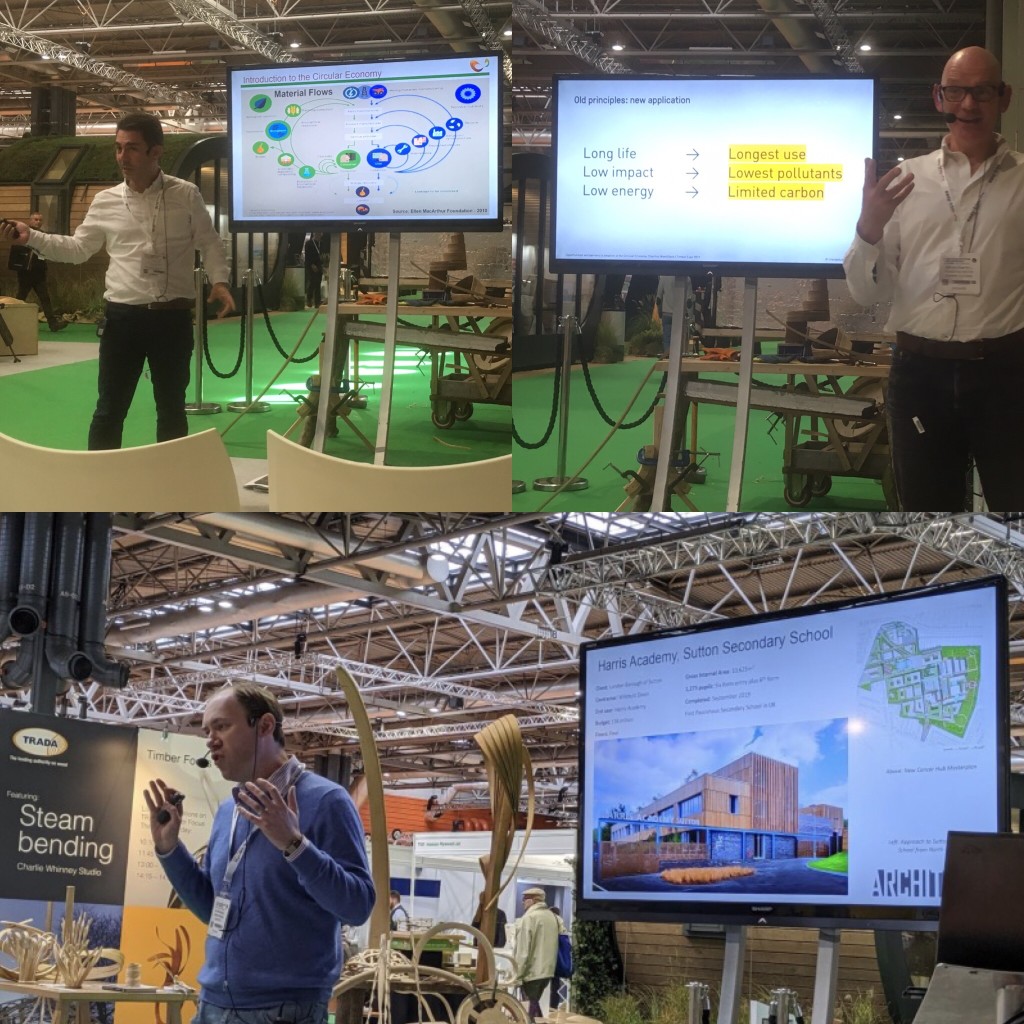