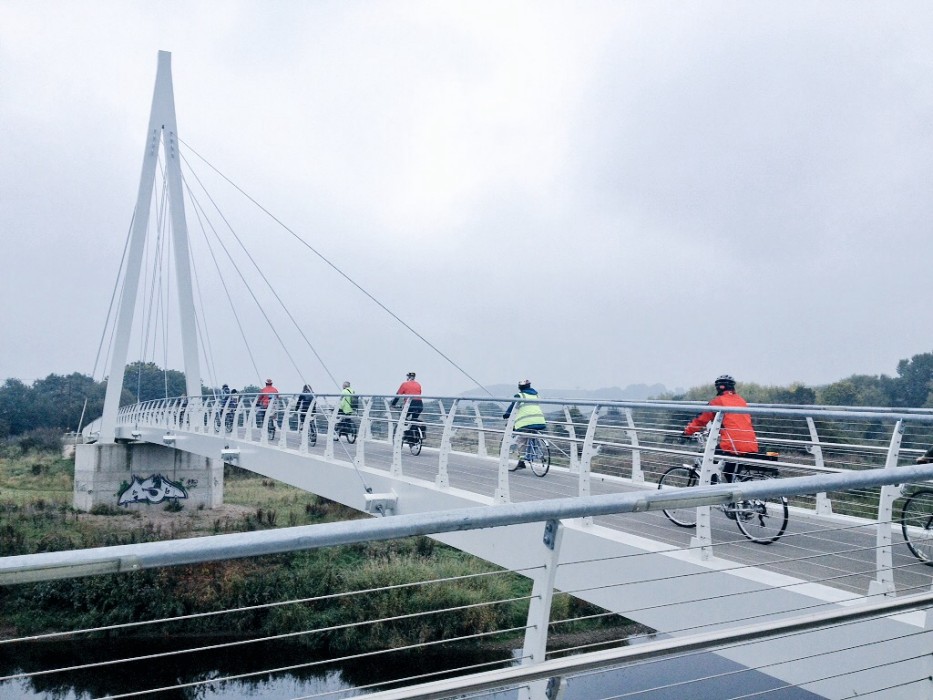 Following on from last year’s inaugural Hereford PedalHaus, this year’s event, coinciding with hEnergy week, was another success. Approximately 15 professionals and green building enthusiasts, including the youngest ever PedalHauser at 3 years old (!) and another 14 year old turned up on their bikes to visit three projects local to Hereford.

The first project was a new build Passivhaus in central Hereford. It was useful to see this super-insulated, Bauhaus-inspired house under construction. George Mikurcik from local architectural practice Architype explained the basic principles of the design, including thermal bridge free construction, orientation, shading and airtightness. The owners Claire and Huw happily answered questions on a whole range of subjects.

Second project was another private house in central Hereford. Completed approximately 7 years ago it did not quite achieve passivhaus levels of insulation or airtightness, but still provided a very comfortable environment and low energy bills for its residents. Cake and hot drinks were very welcome after a cold morning start – thanks Giles!

Final leg of the tour took the participants across the new pedestrian bridge to Rotherwas, home of the new RIBA award winning Herefordshire Archive and Records Centre; the first Passivhaus archive facility in the UK. PedalHaus-ers first visited the archive a year ago, just before it was completed, so it was nice to re-visit the facility now that it’s been occupied for almost a year. The group was split in two and was given a tour by Liz and Elizabeth, both working at the facility. The public / office part of the building was very comfortable and flooded with daylight. Nick Grant form Elemental Solution explained that the repository, an insulated concrete box for storage of documents and artifacts, has been monitored for humidity and temperature. Evidence of the monitoring showed that the building performs well within the new PD5454 guidance, which helps control the temperature and humidity requirements, whilst using minimum amount of energy. This is great news for the long-term viability of the facility.

All in all it was an enjoyable day out, which will hopefully be repeated again soon!

Herefordshire Archive and Records Centre
Back to top
X