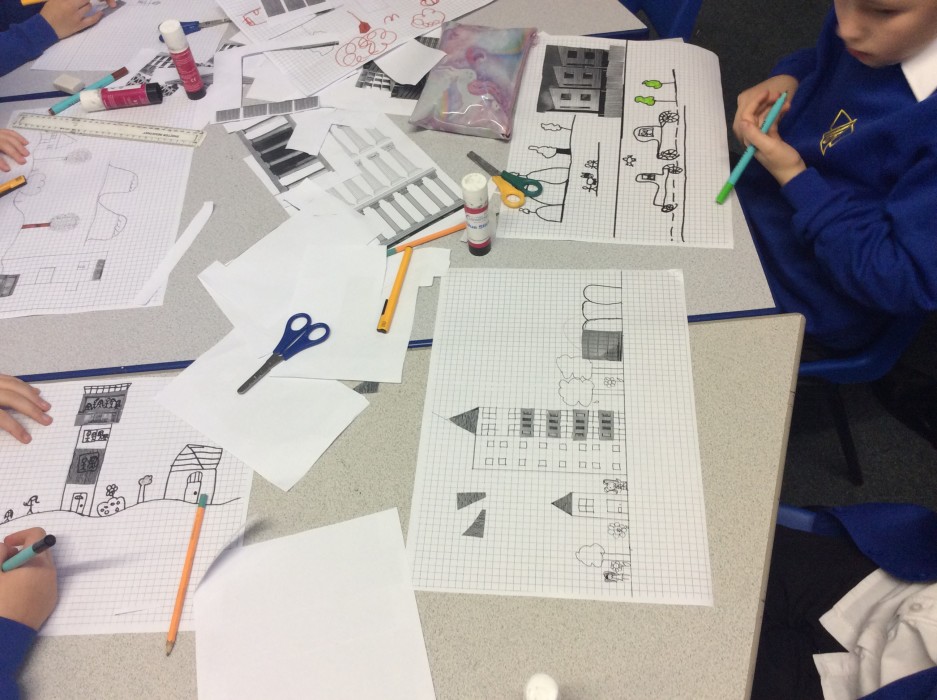 Lydia Moth and Chris Rooney from Architype Hereford represented the practice as part of the RIBA Architecture Ambassadors programme.

Architecture Ambassadors are young architectural professionals who volunteer to partner with schools to inspire the next generation about the excitement and potential of the built environment. The objective is to empower youngsters so that they can develop their own views about architecture and therefore contribute to the debate.

Both Lydia and Chris felt they didn’t have sufficient stress and workloads in the run up to Christmas (!!) and so decided that in addition to impending project deadlines, the Architype Forum, a looming public consultation, university MArch applications etc etc, it would be a really good idea to lunge into a full blown attempt to educate young people about the busy and exciting world of architecture. -on reflection, probably the most important thing the list!

The workshops took place on the  6th and  7th December 2018 – hopefully the jettison of a rant above explains why this blog is now being published in February!

I was excited about the opportunity of teaching but was also apprehensive about what was to come. I spent a great deal of time beforehand preparing a detailed teaching plan, thinking about classroom tasks and devising supporting materials.

When we were assigned to Hillstone Primary School, I assumed that Lydia and I would be teaching together, the School had other ideas! We were each given our own class of 30 pupils to manage over the two days; fortunately we had excellent support from the class teacher and teaching assistant.

No architecture training quite prepares you for that initial meeting with the class. This is a visceral experience; you are immediately aware that 30 young people are looking to you for guidance.

I started by explaining that I was an assistant architect, part way through a very long training process. I told them that I had been studying architecture for almost as long as they had been going to school. This generated a good degree of bewilderment.

I gave the class a brief introduction to the role and work of an architect and showed them a short film featuring Jenny Kerrigan and Lee Fordham. I then presented a few architectural models that I had built at university and Architype. I also passed around a few hand drawings and sketches from my portfolio. This all seemed to capture and hold their attention and produced a good deal of excitement.

After a short break I split the class into three groups and set a task of building the tallest tower possible using a prescribed set of building materials, provided by me. On each of three tables were cocktail sticks, lollipop sticks and two big packets of liquorish all-sorts. This task would usually involve the use of jelly babies but I thought I would use a less tempting product as the connecting material. My attempt to restrict ‘wastage’ was somewhat thwarted as many of the children announced that they loved liquorish all-sorts.

This was to be a competition; the rules of the task were simple:

The teams set to the task straight away. I really had not anticipated the chaos that would ensue. The children rushed straight into the task without any planning or consultation. There was a general grabbing at the building materials with individual children set on constructing their own tower. I quickly stopped the group that I was monitoring and told the children to listen to what each other had to say. I assigned a scribe to write down details of the materials available and to sketch out some of the construction ideas.

Mediating divisions in my team was quite a task. The children wanted to do their own thing, their own way, without listening to each other. It did occur to me that this part of my ‘teaching experience’ was readily transferable to the world of work and may have particular relevance in an architectural practice. 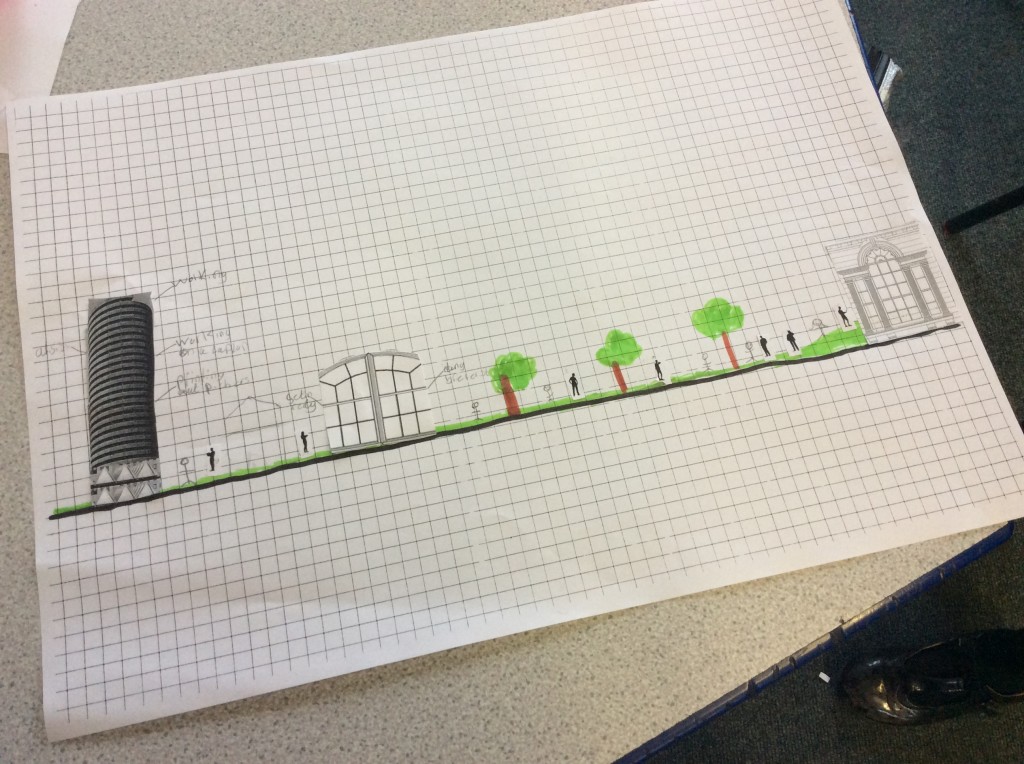 I stopped the class to allow myself some thinking space and also to let the children see how each of the groups had approached the task. Interestingly, the children were not above engaging in a bit of industrial espionage, with the odd spy being sent off to see what other groups were doing. On reflection perhaps the children were learning to work collectively faster than I had appreciated. Lots of children started shouting out that others were cheating and stealing their ideas. I decided to deal with this issue ‘head on’. I suggested (with a laugh) that this was not cheating or stealing but a great example of how we use the work of others to help inspire different approaches to design.

The towers produced by the groups varied enormously. One group had interpreted my instructions literally and had used absolutely everything on the table, including glue sticks, rulers and pencils, to build their tower. This was not the only issue, although the tower was very tall, it was presented horizontally outstretched across the whole table. It was a thin, precarious tower which although the longest, was not capable of standing upright. The lesson regarding ambiguous briefing revealed itself to me very beautifully.

My group ended up producing a number of small towers, due to a schism forming, I somehow managed to miss this developing. I asked the team to explain what had happened and then I reiterated to the whole class that this was a ‘TEAM BASED TASK’ and that they would stand a better chance of winning if they worked together.

The last team produced a single tower which stood higher than the others, although it was quite precariously balanced and began to twist and lose structural stability.

After a quick de-brief and analysis of the results, I allowed the class a further 15 minutes to have another attempt at building the tallest tower.

The second day presented a further challenge in that Katy Wade, a representative from RIBA, arrived ready to sit in on my lesson as part of a monitoring process. Thankfully, Katy’s approach was to provide assistance in helping some of the children, rather than sitting back and simply assessing. I was very pleased to have her help.

I decided to get the children involved in some basic architectural drawing. I used my first ever technical drawing lesson from university as inspiration. I instructed the children on how to draw fruit in plan, elevation and section. I explained each type of drawing and then drew them on the board. I then placed a piece of fruit on each of the tables for the children to draw. After drawing the elevations of their fruit, the children then imagined that they were birds looking down on the fruit, in order that they could see and then draw the plan view. Finally, I cut the fruit in half in order that they could draw the sections. I consider that although this was a challenging exercise for everybody involved, many of the children obtained a good degree of understanding from this task. 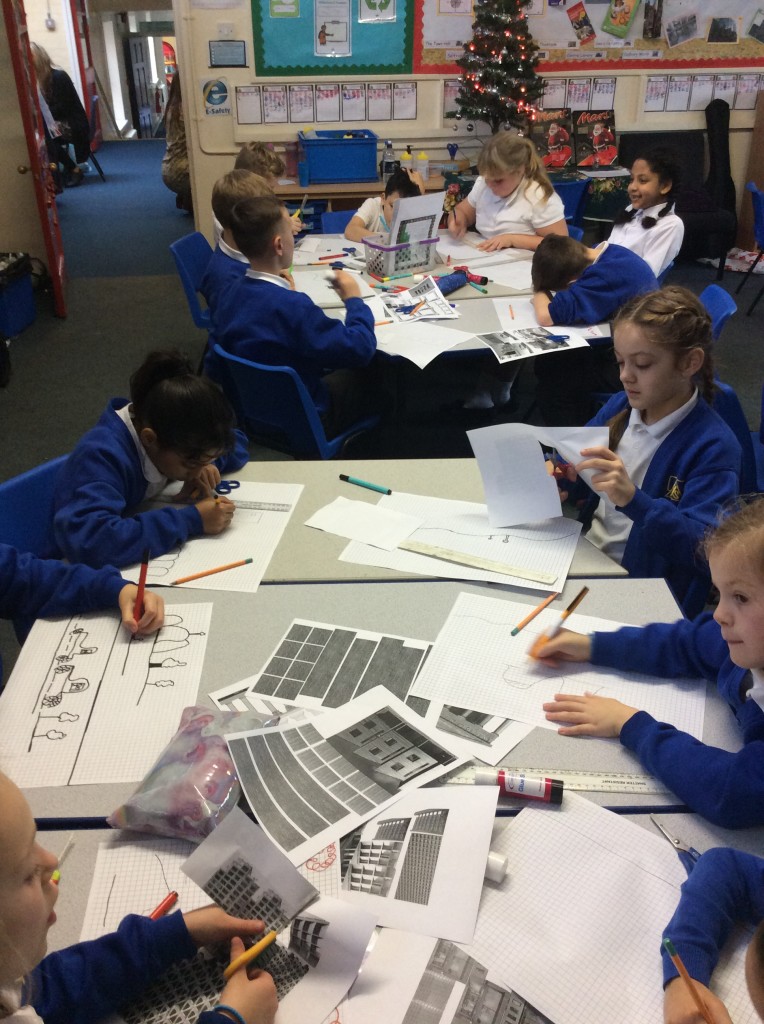 One of the final tasks was to get the children to sit down and look at a series of house plans produced by Architype. Alongside the plans I had produced cut out furniture drawings to scale. I explained a number of the rooms in the houses and demonstrated where furniture could be placed in the rooms, by pinning the furniture to the plans. I was absolutely astounded by the ability of the children to understand the plans. Each time I pointed to a room, they were able to explain what the purpose of the room would be, where the stairs would be in relation to a particular room and also quickly point out where the doors and windows were positioned. 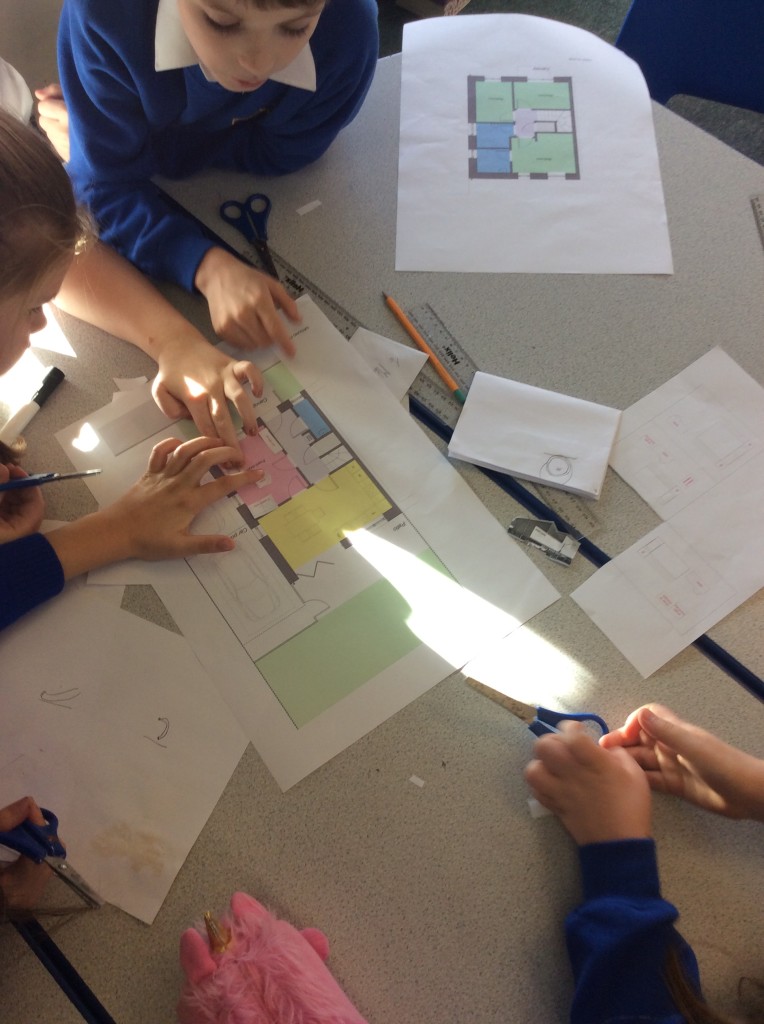 I then issued the children with some different plans and furniture to cut out themselves. They then had to place and arrange the furniture in the buildings, in the way they considered to be the most appropriate. They did a good job with this. I then got them to explain what they had done, together with their reasoning.  One group placed wardrobes in front of the windows “to stop burglars coming in”. I did acknowledge the logic of this approach but suggested that this might cause a bit of an issue in respect of letting natural light in to the building. 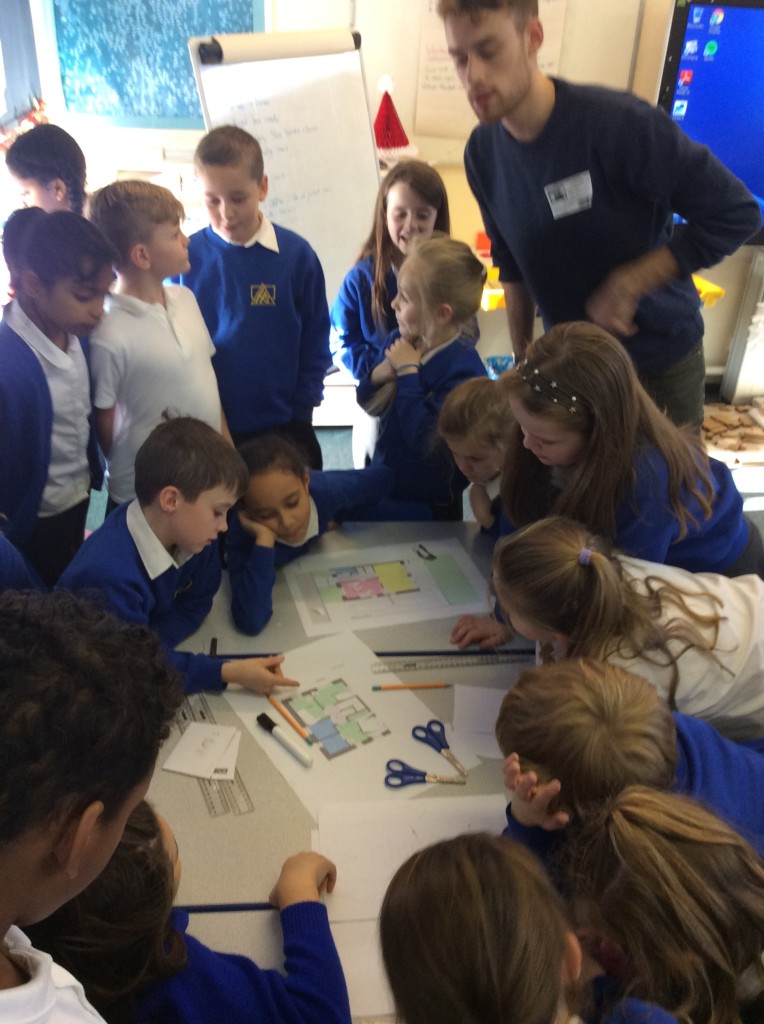 I would thoroughly recommend teaching through the RIBA Architecture Ambassadors programme to all trainee architects; this is an incredibly worthwhile scheme. I personally got a tremendous amount out of my two days. I had to be prepared, adaptive, think on my feet and be permanently enthusiastic. The experience was exhausting, exciting and nerve wracking. The children were excitable, demanding and friendly. I was really surprised and very pleased by the children’s ability to quickly comprehend architectural plans.

It was a good feeling to be ‘giving something back’ and it made me appreciate just how hard school teachers work. One of the real surprises for me was that the children can be as inspiring in their own right, as we are supposed to be for them.