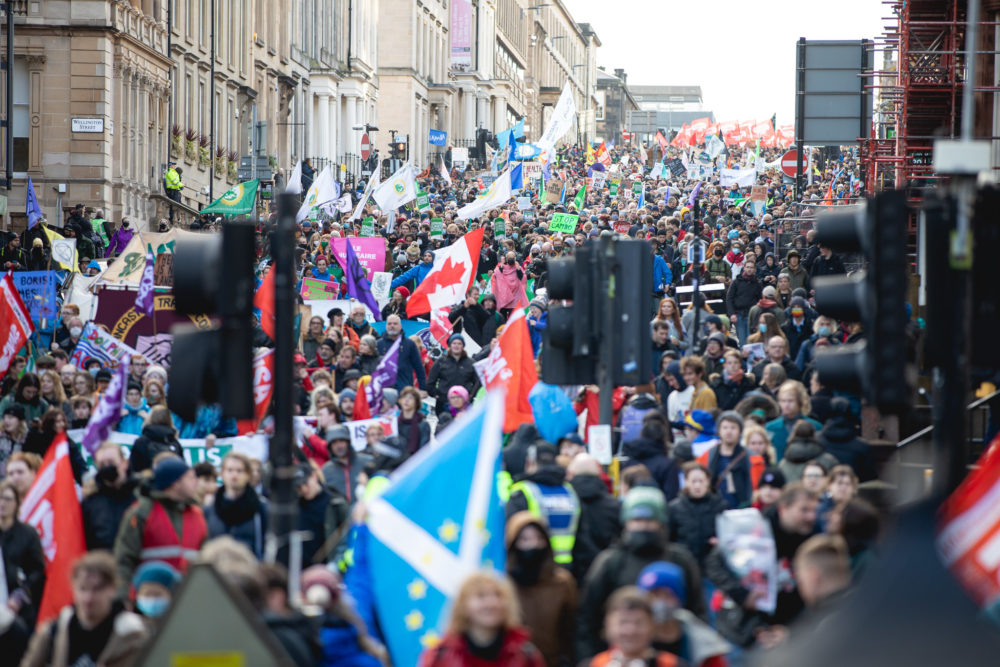 COP26 has drawn the eyes of the world to Glasgow for a fortnight and focused the minds of those involved in the built environment on the worsening climate emergency. In the UK, where the Committee on Climate Change (CCC) had announced earlier in the year that the country was further behind in terms of climate adaptation than it was when assessed five years ago, several plans and strategies were published in rapid succession ahead of hosting the 26th Conference of the Parties. These documents sought to provide as comprehensive an overview as possible as to how the UK government means and plans to achieve its net zero goal of 2050.

CCC assessments have stressed that “the UK’s legally-binding climate change targets will not be met without the near-complete elimination of greenhouse gas emissions from UK buildings”. So, without legislation and policies that accelerate the decarbonisation of buildings and construction – accounting for 49% of U.K. greenhouse gas emissions – the UK will struggle to achieve these necessary climate targets.

The loudest headline-grabbing statement from the Heating and buildings strategy was the Government’s goal of at least 600,000 annual heat pump installations by 2028 – favouring the electrification of heating and market mechanisms as a flagship policy to decarbonise the UK’s 28 million homes. But the strategy’s loudest omission and oversight was any mention of or reference to existing standards; methodologies that could be adopted at scale to accelerate the decarbonisation of buildings – such as Passivhaus, EnerPHit or AECB Standards.

Since 2016, over 570,000 new homes have been built in the UK that are not designed to be comfortable, healthy, or resilient to rising temperatures and will require adaptation or upgrades before 2050. New build standards are far from being in-line with net zero and as the announced energy efficiency goal is EPC band C by 2035 across UK housing stock and by 2028 in private rented homes, that number will continue to rise.

While not mentioned in the previous strategy, Whole Life Carbon benchmarking and regulation is at least being recommended in the Transforming Infrastructure Performance: Roadmap to 2030 but lacks a clear timeframe for its implementation and the rigour of this regulation remains vague. Positively, LETI’s efforts have quantified such benchmarks for new and existing buildings, with the published guidance documentation including timeframes, so this gap in government policy could be quite easily addressed by its adoption and implementation.

It is a similar story regarding strategies to build sufficient capacity to retrofit the UK’s existing buildings – of which there are around 30 million in total. There is encouraging talk of programmes of upskilling and retraining and suggestions of funding initiatives and market incentives but no mention of reducing – or better still, removing, the VAT of 20% still being applied to refurbishment works, as called for by many including UKGBC and AJ’s Retro First campaign. The scale of the retrofit challenge is vast, as laid out by the Passivhaus Trust it is an equivalent to “one home every 35 seconds between 2020 and 2050. Or, if every retrofit takes four people six months, it’s 500,000 simultaneous retrofits needing two million people in the industry” so policies that build the construction industry’s retrofit capacity and expertise and make the challenge achievable and affordable are crucial.

Several of the published strategies note the need for systemic change in all parts of society – positively echoing recommendations of the Intergovernmental Panel on Climate Change. These include recognition that “Net zero will mean gradually, but completely, moving away from burning fossil fuels for heating”, “the journey to net zero buildings starts with better energy performance” and an intention to begin “Ensuring all new buildings in England are ready for net zero from 2025” but the CCC’s Independent Assessment of the UK Net Zero Strategy clarifies that despite ambitions “policies for buildings are less developed than for other sectors.”

As negotiations take place during COP26 it is crucial that we put them into perspective: 92% of historical emissions that pushed the planet beyond 350ppm of carbon dioxide were emitted by the Global North – and this includes the UK, and the IPCC’s Climate Change 2021: The Physical Science Basis – described as “a code red for humanity” by UN Secretary-General António Guterres, stressed that the next four years are critical to mitigate worsening climate breakdown. This raises the issues of timeframes and of climate justice: countries most responsible for historical emissions have a responsibility to support transitions to net zero in lower-income countries and to decarbonise their own sooner than the IPCC’s prescribed global carbon neutrality target of 2050. Earth is on track for 2.7°C of global heating by end of century according to the UNEP’s Emissions Gap Report 2021: The Heat Is On, meaning commitments to reach net zero by 2050 from countries like the UK, are a step forward but not a step far, transformational nor urgent enough.

While there is movement and promise in the documents published ahead of COP26, what is lacking are policies for buildings in-line with recommendations of the IPCC Special Report on Global Warming of 1.5°C, published back in 2018. It stated that for the world to be on a 1.5°C-consistent pathway, new buildings should be “fossil-free” and “near-zero energy” by 2020 – something that UK building regulations do not guarantee, and it required an increased rate of refurbishment of 5% per year in OECD countries. The decarbonisation of buildings and the mass-retrofit of UK homes present the opportunity to reduce greenhouse gas emissions while creating vast numbers of green jobs in assessment, construction, and design, and could lift thousands out of fuel poverty: operating as a combined climate, economic and public health strategy. Guidance, methodologies, and technologies to deliver this already exist in abundance, as do exemplars of its delivery; legislation, policies, and regulations to accelerate their implementation are what is in short supply.

Image credits from top to bottom: