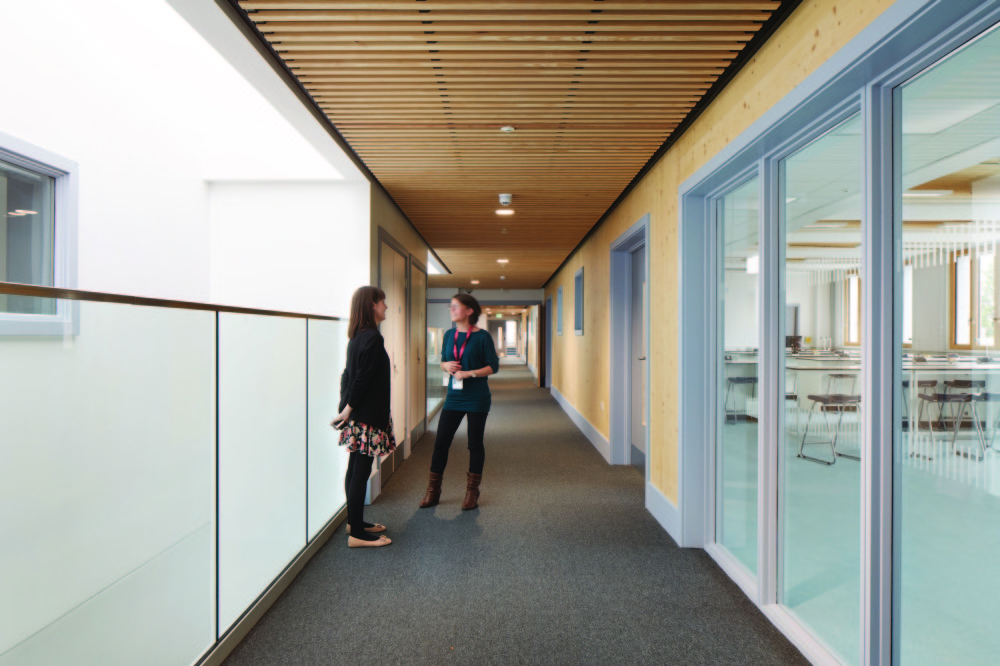 The first day of secondary school is always an exciting, memorable and slightly daunting day, but the first day back at Harris Academy Sutton was an extra exciting day -for students, staff and the whole design and construction team who were eagerly waiting to hear their feedback and first impressions. I popped in for a visit to see how they were settling into the UK’s first Passivhaus secondary school and the largest Passivhaus school in the country.

Initial responses from both pupils and staff were about the sheer scale of the new building which “took a bit of getting used to”. But with the help of boldly coloured staircores and the well-considered layout of faculties, they’re quickly becoming familiar with their new building. The school will fill up year by year as the number of pupils grows, reaching full capacity with sixth form by 2023. 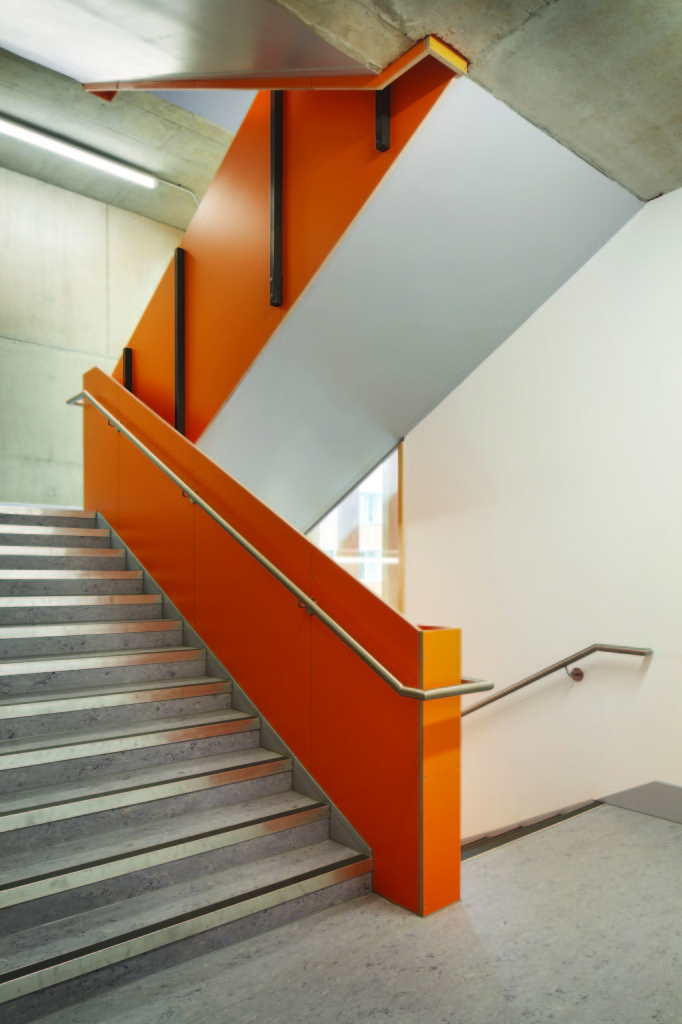 Staff were impressed by the large windows and the amount of natural daylight they brought in, while the pupils commented on the classrooms being a lot brighter and less “stuffy” than their last school. It was great to hear so many positive comments about the choice and quality of materials, andthe year 7s were keento be reassured about the durability and lifespan of the Douglas Fir timber used for the cladding.

It was great to hear that the pupils already knew about the school’s exemplary environmental status and it was even better to see that they’ve already established an eco-action team to promote positive environmental behaviour within the school. After a short workshop with some energetic year 7s and members of the eco action team, I felt reassured that these pupils are up for the challenge of retaining the school’s reputation for high sustainability aspirations.

They’re already making plans to encourage pupils, staff and family to reduce their energy consumption; from arranging inter-house recycling competitions, developing strategies to remind people to switch off lights and equipment, and arranging quizzes to test people’s knowledge of the environmental challenges that we’re facing. They’re also planning an assembly to share their ideas and understanding to the rest of the school, where they’ll now be able to explain some of the methods used to reduce the embodied carbon footprint of the school during construction. 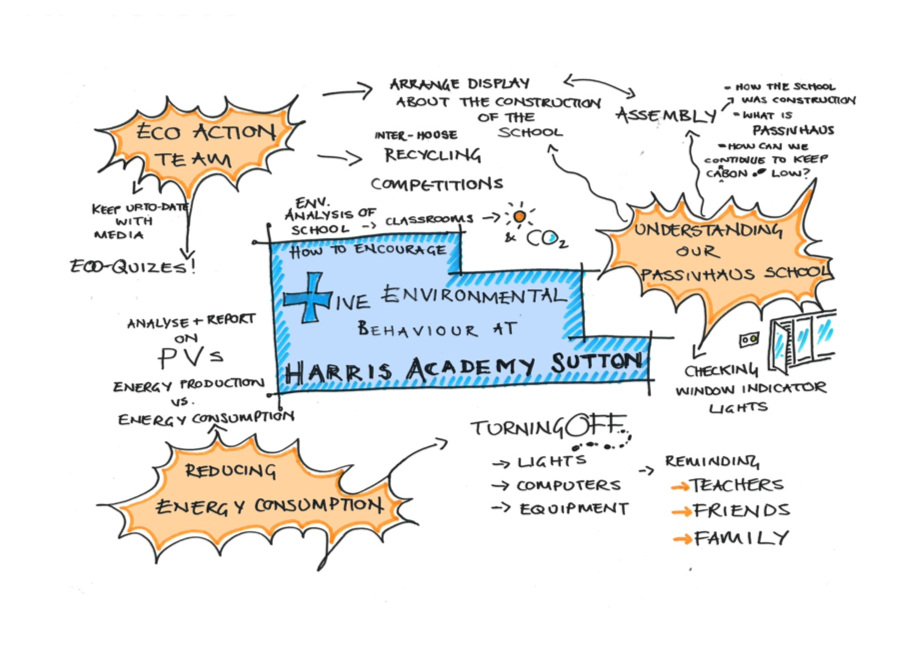 The eco team students worked with Architype on a plan to encourage positive environmental behaviour throughout the school.

“We were learning about how eco-friendly the school is as we watched it being built. This is much less stuffy than our classrooms last year”
Year 8 student

The year 8s have been keeping an eye on the construction works over the last year from their temporary school within the wider Sutton hospital site. They were interested to hear more about the speed and ease at which cross laminated timber (CLT) can be erected. While at their previous temporary school, the eco action team had undertaken an analysis of the quality of their classrooms in terms of daylight and air quality (or the stuffiness scale!). They now plan on repeating the exercise in their new and improved Passivhaus school.

I was so impressed by the pupils’ enthusiasm and I can’t wait to hear about their success stories in passing on positive environmental lessonsto the rest of the school, and to all the future pupils in years to come. 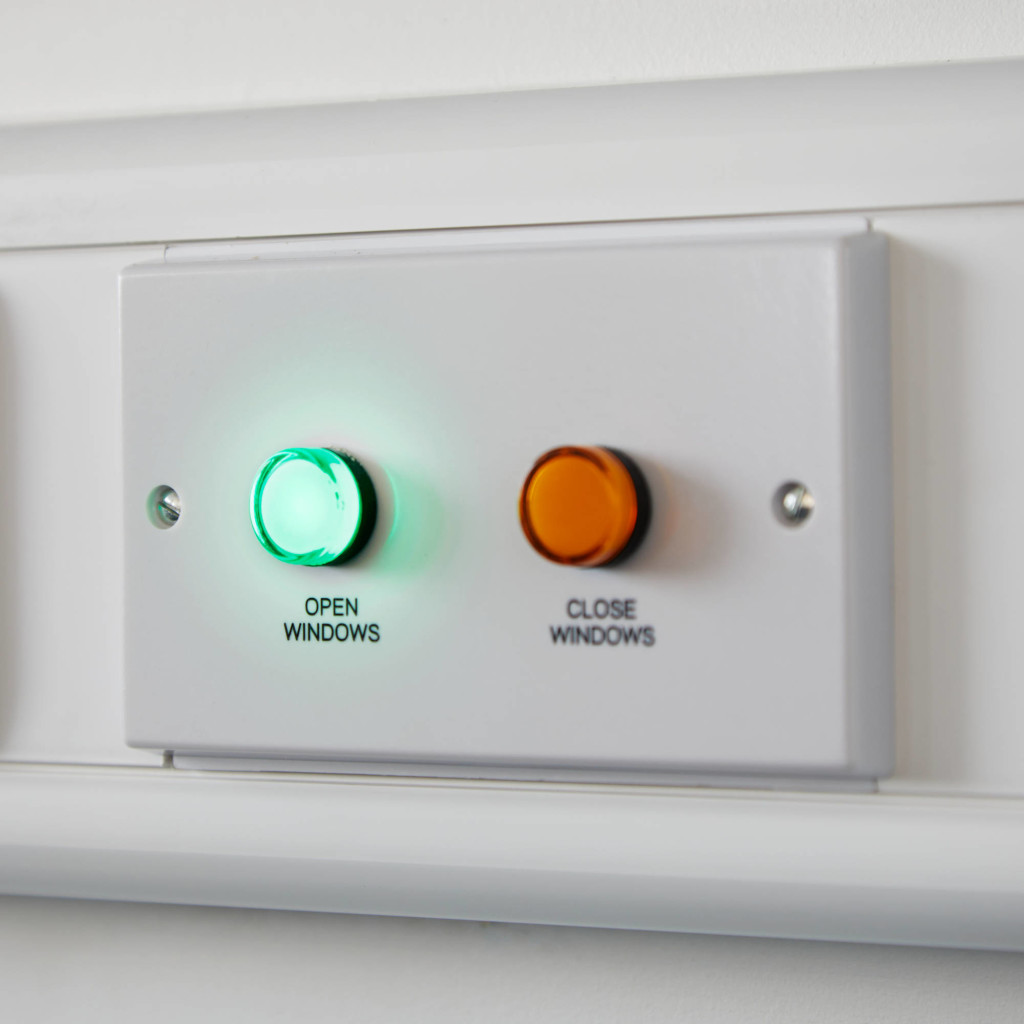