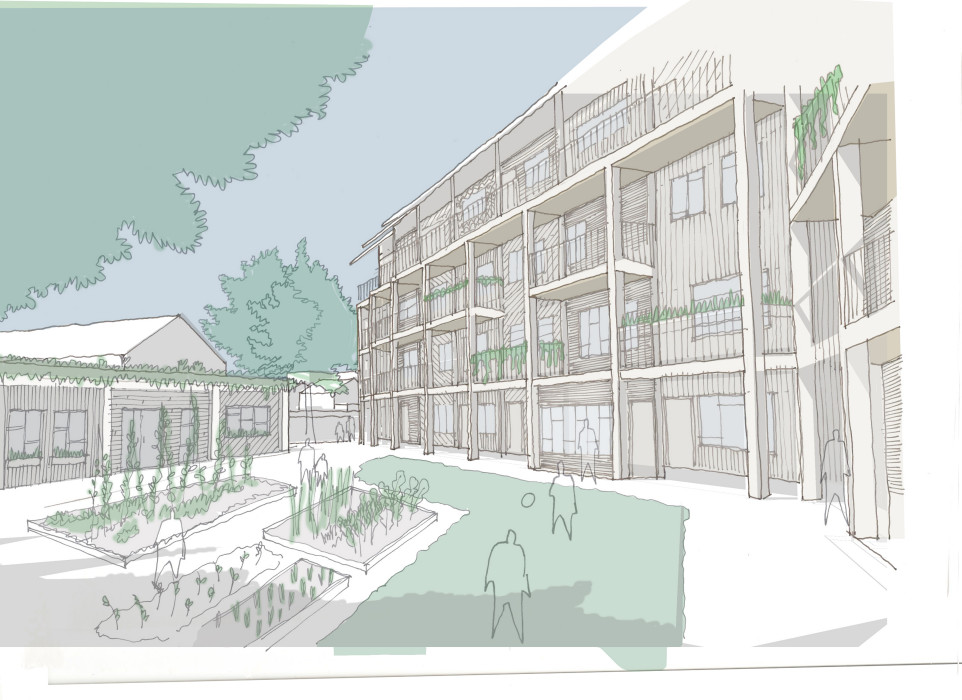 A community self-build group, the Rural Urban Synthesis Society (RUSS), which aims to provide homes for those priced out of the housing market, has been approved to deliver up to 33 self-build units on an old school site in Lewisham, after being named the preferred bidder by Lewisham Council.

The Lewisham-based community land trust teamed up with Architype and Jon Broome Architects to design the innovative scheme, which seeks to develop the skills of self-builders in an ambitious Passivhaus inspired design.

The scheme offering 33 new homes will comprise of 1 to 4 bedroom properties, across and range of tenures including social rent, affordable rent, shared equity and shared ownership. The specific mix of properties and tenure will be tailored to suit the mix of residents that come forward for the scheme. People interested in the project will be able to get involved in the self-build process – and learn new skills – regardless of their skill level at the outset.

The design, which will promote social inclusion, will incorporate large terraces to maximise external space for shared gardens and food production, as well as roof gardens and communal pavilions. A community hall, office and kitchen will also be created to accommodate community meetings, performances, physical activities and childcare.

The scheme looks offer an alternative response to the current housing crisis in London, tackling not only the shortage and cost of homes but also the quality. Unit sizes will be 10% greater than area standards in London and the ‘fabric first’ approach will promote high-quality, high performing robust materials that will drive down life-cycle costs. The proposed Passivhaus designs will also ensure residents maintain low utility costs through occupation, for some as little as £70 a year.

For Architype, the project is a return to the practice’s self-build roots, with their early pioneering projects such as ‘Diggers’ self-build in Brighton and ‘Hedgehog’ in Bevenden, inspired by the late Walter Segal.

Associate Director of Architype, James Todd had this to say about the scheme “The self-build development on the Church Grove site is a fantastic example of a bottom-up approach to the housing crisis, challenging the conventional market led top-down approach which is currently failing all over the UK. RUSS are looking to build truly affordable homes, appropriate to income rather than market prices so that the real community can afford to continue living in, and contributing to their local area.”

The project, which was initiated by RUSS founder, Kareem Dayes, was inspired by Dayes own upbringing living in a self-build property on Walter’s Way, built by his parents in the early 1980’s. After 5 years of planning and fundraising, he was delighted with the result; “We are now able to begin the real work of building a truly affordable and sustainable community and can now move a step closer to empowering local people to create an alternative to private ownership and private rented housing.”

Although completion of the scheme is not expected until 2019, work on the design development will begin, followed by skills teaching and more fundraising. “We aim to establish a new precedent, a replicable model in community-led housing that will benefit people currently unable to access housing on the open market. As a Community Land Trust we invite all local people to get involved, become a member of RUSS and participate in the realisation of this project.” Added Dayes.

Anybody interested in becoming involved is encouraged to get in touch via the web and welcomed to the community meetings, with official expressions of interest opening soon.

Watch James and Kareem discussing the scheme on London Live

Community Self-Build Projects: Hedgehog and Diggers
Back to top
X