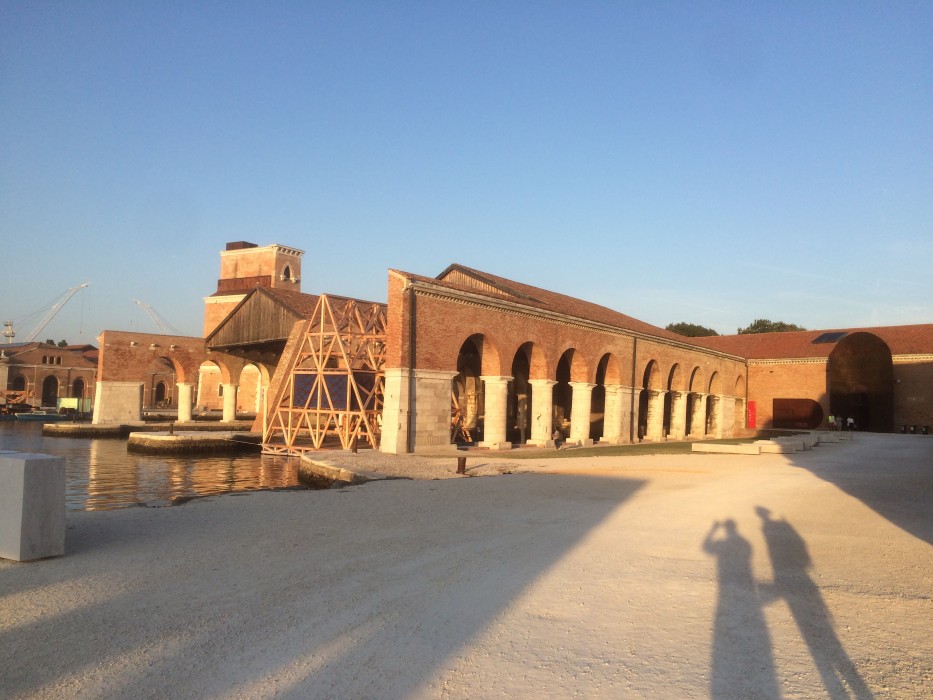 My first experience of the Biennale was 2 years ago when Rem Koolhaus directed the main exhibitions. My partner and myself, both architects never really expected to attend the next one, but when we heard that it was to be directed by the innovative socially minded Chilean Architect Alejandro Aravena we decided it was one not to be missed!

I remember seeing his Quinta Monroy Housing scheme presented in a lecture during my Part 2 and being amazed at the unfettered, pragmatic beauty of it. The title ‘Reporting from the Front’ is basically a series of examples, ideas and stories from across the world showing how people-centred architecture has been, or could be achieved.

Having been before, we had learnt to be organised, selecting a few key things that we definitely wanted to see; it’s almost impossible to see everything without being overwhelmed. Some of our personal highlights included:

You enter the Danish pavilion into a well daylit lobby that directs you to a tall room with levels upon levels of models of Danish projects, displaying the social and public nature of Danish architecture. This pavilion wasn’t particularly clever or enigmatic but its simple concept was the refreshing thing about it. Models are such an engaging way to quickly understand any project, so the sheer number and breadth of models spoke volumes.

To the right behind a black curtain there was a tall, darkened room with a video playing on three walls and a viewing bench on the fourth. The video is basically the Danish Architect and Urban designer Jan Gehl, discussing his career, influences and the importance of designing for pedestrians and cyclists in cities. Not overly familiar with Jahn Gehl’s work, I found it interesting and informative. One thing that struck me was a short section about thinking and designing in first person rather than through abstract planning. This was interesting to me as my Part 2 dissertation was about the conflict and balance between conceptual abstract and perceptual experiential designed tools. I think any drawing, process or method in architecture is generally one or the other and it’s important to balance the two so as to solve complex spatial problems as well as think about human scale. 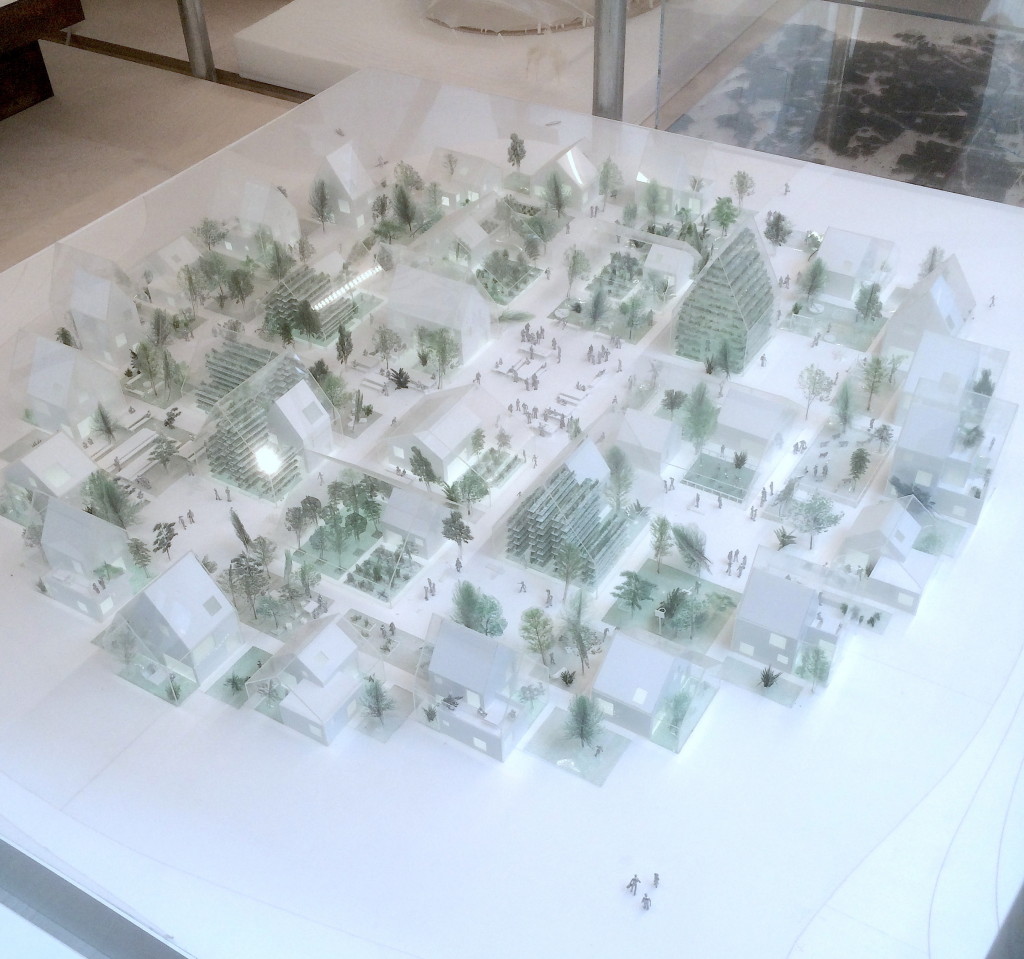 The Japanese pavilion focuses on how the Japanese are getting to grips with an increasing culture of sharing. One thing that really stood is a large-scale model of a sort of co-housing scheme where an industrial unit has been converted into a series of flats with a large communal space. The model was displayed alongside a series of photos of the project. The detail was amazing, the sense of space was great and you really got a sense of what it would be like to live there. 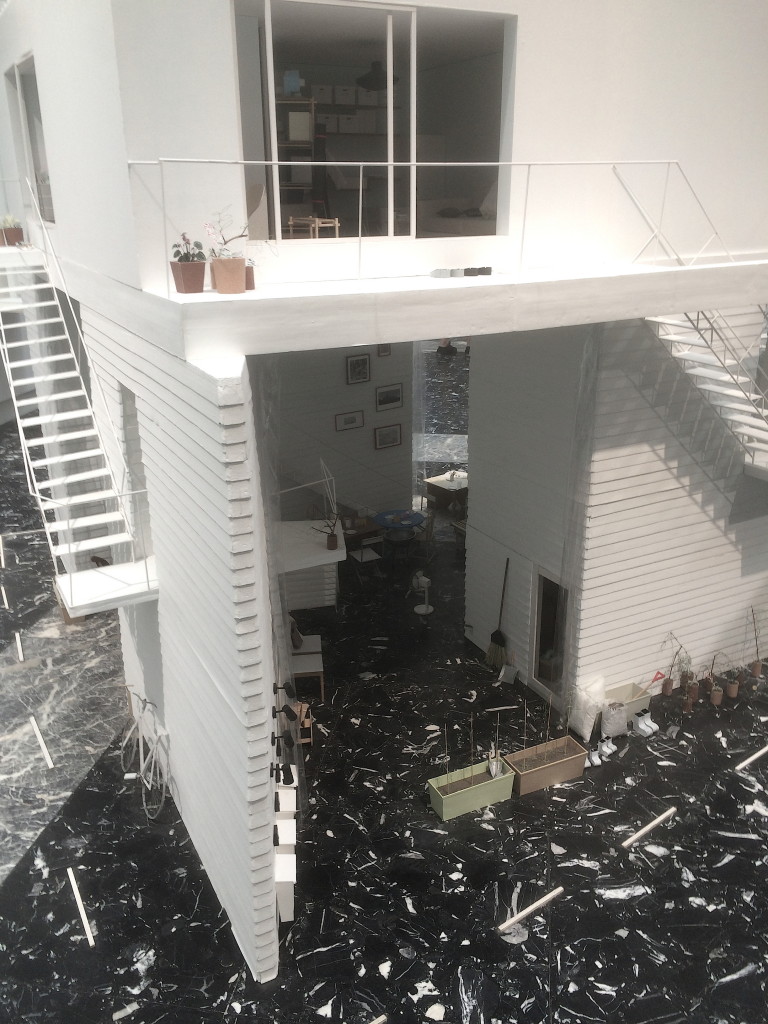 The Polish exhibition, Fair Building called for an equivalent to a ‘Fair Trade’ stamp in construction. The concept was straightforward, a room filled with scaffolding arranged to create a series of smaller spaces consisting of a projected video image with a bench seat in front. Each video was headcam footage of a construction worker going about their daily business, whilst talking about their experiences both positive and negative. Some of the footage did seem quite dangerous and the hours and working conditions discussed the pressure and deadlines faced.

In the main exhibition in the Guardini there was a great case study of a project founded by a former policeman and the architect Andrew Makin. This was the regeneration of the Warwick Triangle a flyover intersection in Durban, South Africa that reminded me of the novel Concrete Island by J G Ballard. The sense of a flowing public space in the model and the large format photos on the wall was great. 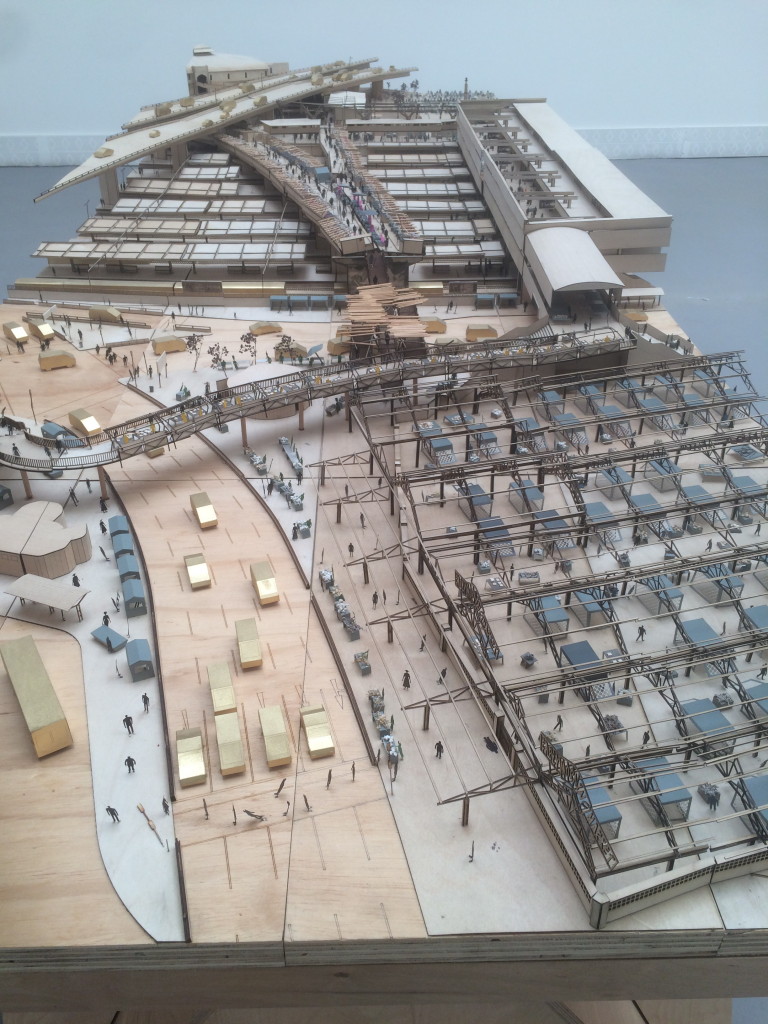 Every now and then when visiting something as big as the Biennale you need a good video installation with some comfy seating to rest you legs. To be honest that’s the only thing that drew me to the video projection by Assemble in the Arsenale. That said, it was great; a series of short films of children around the world playing in an ad-hoc manner, using spaces not specifically designed for play, with what seemed like incrementally increasing levels of risk.

Alongside the videos were voiceovers of people who worked with children in some way talking about the importance of non-structured play for children’s development and especially using spaces that aren’t specifically designed for play so that they can explore and be more creative.

It really got me thinking about how fenced-off play areas in new developments weren’t really enough of a consideration when it comes to play facilities, designed more for observation than for the user. There are also lots of instances in our towns and cities where play is somewhat prohibited, for example, metal studs plastered on seating to prevent skateboarders and loitering by youths.

Watching an 8-year-old boy lift a pick-axe above his head before smashing it into the ground whilst his younger brother was crouched right next to him did make me flinch though, highlighting the flip-side of unsupervised play. It also triggered a memory of my 11-year-old self, when my younger brother was using a hammer to smack in a post for some fencing for our new rabbit. He lifted it high and his grip somehow yielded it and it went flying into my forehead. Lucky for me that’s one of the thickest parts of the skull. If there are any spelling mistakes in this post…I blame that.

Over the past year, my work has been mostly focussed on the design of an Extra-Care facility, St.Loyes in Exeter. One of the key design focus points has been designing for dementia. The Irish pavilion in the Arsenale is a collaboration between Niall McLaughlin and Yeoryia Manolopoulou and focuses on lessons learned in designing for Alzheimer’s which is one form of dementia.

One reasons that architecture is incredibly important in designing for dementia is the fact that the part of the brain that deals with the consolidation from short-term memory to long-term memory, (the hippocampus) is also the same part that deals with mapping and spatial navigation and its one of the first areas to be affected by dementia. Interestingly, the role of the hippocampal region in navigation appears to goes so far back in our evolution, you could almost say the reason we have memory is largely to do with a need for navigation.

The installation redraws the experience of several users in one building. It highlights the fact that people suffering from dementia find navigation difficult because their memory impairment obstructs their ability to synthesise or map a complex space by collating their lived experiences as most of us do on a daily basis. 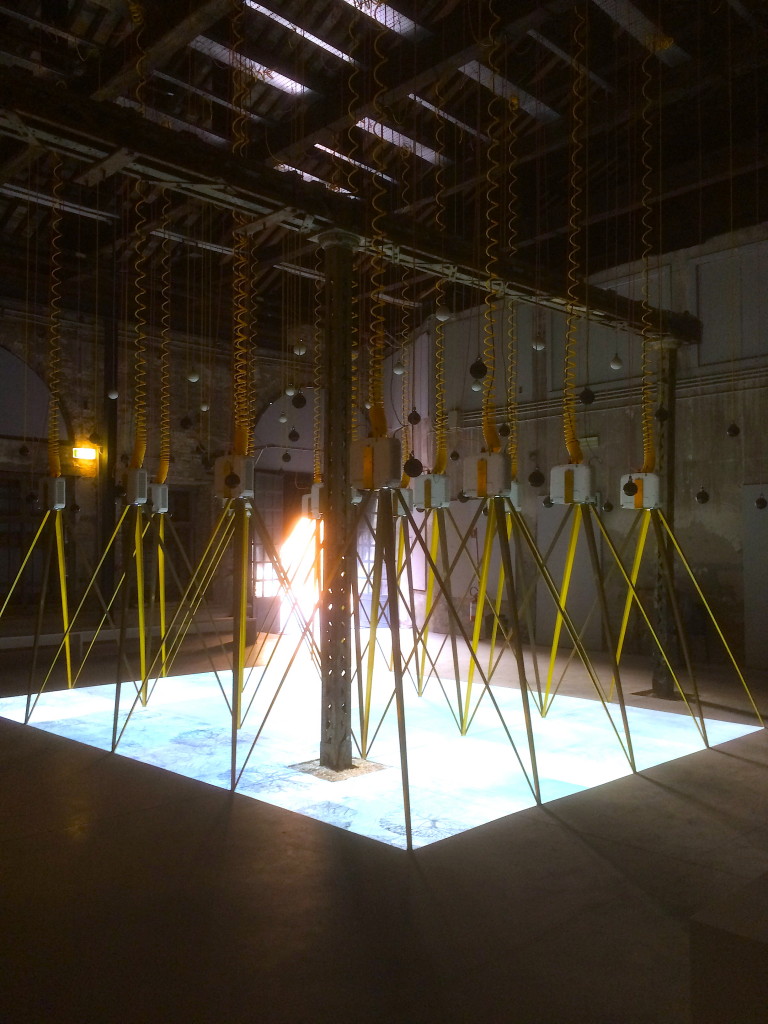 All in all it was great to see an exhibition that had allot of real live projects with an emphasis on the process and challenges of getting things done for people who need it.